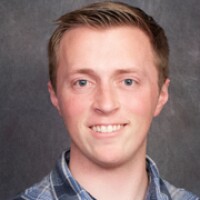 Born in Salt Lake City but raised in a suburb of Denver called Parker, Colorado which makes me a huge Broncos, Nuggets, and Rockies fan. I am the second oldest of 6 boys, no girls aside from my sister in law. I have one nephew named Leevi who is about a year and a half old, and he's a crazy kid. I'm super into sports, playing or watching, and I follow the NFL, NBA, and somewhat the MLB. My other hobbies include longboarding, lacrosse, movies, and I really love music even though i can't even play an instrument.

I'm a Manufacturing Engineering Technology major, hoping to graduate in December 2020. I've always had an affinity for making or building things, especially Legos and pinewood derby cars, so I love my major (even if i think it's trying to kill me sometimes)!

I've always been a BYU fan, even when both my parents went to the U and the rest of my family have been U fans by default. I stayed strong though! It's been a dream come true here and I love working for Life Science IT. I have always been curious when it comes to computers, and I have fiddled around with them countless times. To have the opportunity to learn so much about computers and help people solve problems is great, and I go home feeling satisfied every day.

What more can I say, I'm just a fun loving 23-year-old from Colorado trying to survive an engineering degree!