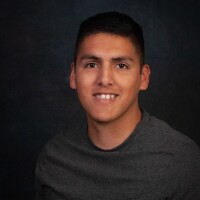 I was born in Lima, Peru but grew up San Marcos, CA. I enjoy outdoor activities, mainly playing sports but I also like to get out and just do fun things with friends and family such as going to big parks, BBQ, movies, etc. I graduated from high school in 2012, then left on my mission to Baton Rogue, Louisiana in 2013.

I started BYU in the Fall of 2015 after returning from my mission. I have changed majors a lot since I started but after going through some business classes, I realized that was not the path for me. I am now studying Computer Science because I have always been interested in computers/technology and have enjoyed the programming aspect of it as well as being able to create. Programming provides an opportunity to dive deeper into computers and learn about how it stores information and how to manipulate data to create useful results. I also enjoy it because it is like a puzzle to be solved which I enjoy but also because it's a way to create new things. I have always enjoyed learning and creating from scratch and my major, along with my job as an software engineer at LSIT gives me plenty of opportunities experiment.

My current project includes creating a more reliable effective way to connect to several different servers and having them all run several commands from one host server through Ansible. Although this is already done through Fabrics, Ansible becomes more effective with its ability to run commands in a linear fashion instead of sequentially.