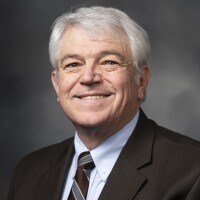 Research Interests
Our lab is currently engaged in research to understand the molecular mechanisms by which the simple bacterium, Escherichia coli senses and responds to changes in environmental phosphate. We are studying this question because it is an extremely useful model to understand complex regulatory schemes in all living organisms. At the heart of this question is a two-component signal transduction system that senses environmental phosphate and controls the expression of many genes for the high affinity acquisition of phosphate and the utilization of alternate sources of phosphorous.

Our current model for the regulation of this response is that the PstSCAB transporter (a high affinity ABC transporter of Pi) senses Pi levels and communicates through the PhoU protein to the bifunctional histidine kinase, PhoR, which interacts with and controls the steady state phosphorylation level of the response regulator, PhoB. Phospho-PhoB binds to specific DNA sequences upstream of Pho regulon genes, interacts with σ70 and stimulates transcription. Pi sufficiency generates a signal that shuts off the Pho regulon by activating the phospho-PhoB phosphatase activity of PhoR. However, when Pi is limiting or when mutations eliminate any component of the PstSCAB transporter or PhoU, the Pho regulon is turned on. This low Pi signal stimulates the kinase activity of PhoR allowing it to serve as an efficient phospho-donor to PhoB. Phosphate starvation also triggers the general stress response in which cells become increasingly resistant to many environmental stresses. The master regulator of this response is σS (RpoS), an alternate sigma factor that competes with σ70 to direct the transcription of genes under its control. The regulation of σS is very complex and has numerous inputs. Its cellular levels are controlled at the levels of transcription, translation, protein turnover and activity.

In the past we have studied the molecular mechanisms of PhoB activation and PhoR function. Most of our current research is focused on under¬standing the PhoU protein. We are currently generating mutations in the phoU gene and will be analyzing the protein in the near future to determine its cellular function and mechanism. We are also studying how the phosphate-signaling pathway feeds into the general stress response of E. coli. We have recently demonstrated that the pstSCAB-phoU message is processed and that one of the pieces interacts with the rpoS message to stimulate its translation.