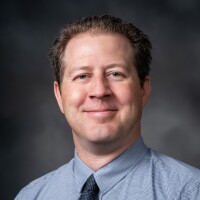 Biography
I am a native of suburban Philadelphia, and received my education at BYU (B.S. in microbiology), University of Pennsylvania (Ph.D. in cell and molecular biology), and a post-doctoral fellowship at Colorado State University. My research focuses on finding new ways to prevent or treat viral diseases, with a focus on HIV/AIDS. We also study how Staph aureus forms biofilms and how it acquires antibiotic resistance. In my personal life, I enjoy spending time with family, fly fishing, and cheering for my Philly sports teams.

Research Interests
Our group studies how viruses cause disease in humans. In particular, we are interested in studying viral pathogens that infect human blood cells. Examples include Dengue Virus (DV), Human Immunodeficiency Virus (HIV), Epstein-Barr Virus (EBV), and Kaposi’s Sarcoma Her¬pesvirus (KSHV). A better understanding of these can lead to the development of vaccines to prevent new infections and anti¬viral drugs to treat current infections. The lack of animal models that can be infected with hu¬man viruses and exhibit similar disease has se¬riously hampered these areas of research. In order to study viral infections of human cells in vivo, we use “humanized mice.” A humanized mouse is one in which human cells have been transplanted. In particular, we transplant hu¬man hematopoietic stem cells in newborn mice; this then leads to multi-lineage hematopoiesis (production of a variety of human blood cell types) and the production of a human immune system in the mouse. Antibody and cellular immune responses of human origin can then be generated in the mouse to a pathogen of interest.

DV infects approximately 100 million worldwide per year and the rate is rapidly increasing. Infection can lead to hemorrhagic fever and death, but no vaccines or antiviral are available. About 40 million people worldwide are infected with HIV, and millions die each year from complications due to Acquired Immunodeficiency Syndrome (AIDS). No vaccines exist, and although effective antiviral drugs are available, they have undesirable side effects and the virus can mutate to make them ineffec¬tive. One side-effect of AIDS is that some chronic viral infections that normally exhibit little to no disease can begin to cause serious disease, such as HIV-associated lymphoma, (cancer of white blood cells). Examples of these cancers are found in patients co-infected with HIV and EBV or KSHV. Once again, no vaccines are available for EBV or KSHV, and we have little understanding of how immunosuppression leads to development of cancer.