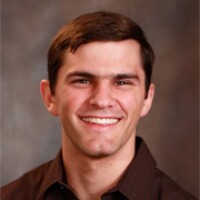 I was born in a small farming community in Idaho, but my family moved to Orem when I was five years old, so I consider Orem to be my hometown. I attended Mountain View High School, where I was a member of the varsity wrestling and football teams, which were both experiences that had a big impact on me as an individual. I love sports and athletic activities, and lift weights or jog several times a week. I also began taking viola lessons in the seventh grade, participating in orchestra in high school and college. I have a wide range of interests, so choosing a major when I began attending Brigham Young University was kind of a struggle for me. I eventually settled on computer science, with a minor in music. After taking a few classes I knew I had made the right decision. The problem solving and creativity involved in writing a computer program can be frustrating at times, but on the whole is a fun and interesting experience. After taking a year of classes, I served as a full-time missionary for the Church of Jesus Christ of Latter-Day Saints in Ribeirão Preto, Brazil. After returning, I took a few Portugueses classes to help keep up with the language, and ended up adding Portuguese as a second major. I received my bachelors degree in 2011 and a Master's degree in 2016, also from BYU and also in Computer Science. My Master's thesis involved creating and implementing a new system for extracting cursive handwriting from scanned images of historical documents (census records, journals, etc, marriage licenses, birth certificates, etc.). Another big event for me that happened in 2011 was on July 15 when my wife Jessica, and I were married for time and all eternity in the Dallas LDS Temple. Our life together is a constant adventure, and we now have three daughters who keep us very busy.